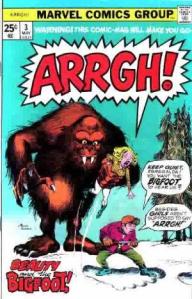 This weekend, I read about a lost gem from the Marvel vaults: ARRGH! (via comics blogger The Magic Whistle). I wasn’t familiar with the title, but according to the page-one masthead, this issue is from May 1975 (volume 1, number 3). The story itself, “Beauty and the Bigfoot!” looks and reads like a full-length Mad magazine story.

I haven’t been able to find much else about ARRGH! but it lasted for all of five issues (you can see the covers here). The clips I looked through aren’t that different from what you might have found in Mad or Cracked during the same time, but the difference is that these were being published by a primarily superhero outfit like Marvel. DC’s Plop! (1973-76) was probably the closest thing to ARRGH!, albeit with a longer lifespan and better pedigree (with a stable including Basil Wolverton, Wally Wood and Sergio Aragones). Its traffic wasn’t in the superhero genre, but it did bring in the horror comic characters Cain, Abel, and Eve, who would later become integral parts of the Sandman universe (part of DC’s Vertigo line).

This stuck with me because humor comics aren’t really something you see with any regularity in comics anymore. When I was a kid, one of my favorite finds was Marvel’s What The–?, heir to the late-1960s Not Brand Ecch. What The–? took the silly, overblown, and cliched elements of comics (mostly Marvel but not exclusively) and created gag-a-minute parodies. The jokes were often juvenile – the Amazing Spider-Ham, for example – but it was PACKED with them, and it was cool to see superheroes get run up the flagpole. 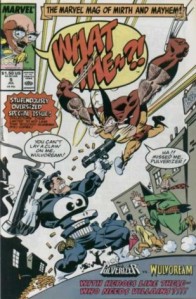 What The–? was probably one of the first comics I read, which was a little like stumbling into Monty Python at that age — you know something funny is happening, but you don’t really understand it. I knew who Spider-man was thanks to my dad’s own fandom, but I think I was actually introduced to Wolverine and the Punisher via What The–? (as Wolverweenie and the Pulverizer), which may be why I have such a hard time taking grim and gritty characters seriously. Well, that and they’re kinda stupid.

There’s not much like that today, with some exceptions. A few years back, Marvel put out a simply drawn bit of strangeness called Wha… Huh? that was packed with cheesy digs on their characters, artists and writers – many of the gags fell flat or were overly in-jokey, but it was nice to see the effort. As recently as 2010, DC’s Larfleeze Christmas special offered a pretty clever riff on the character (and with activity pages!) that could even pass for canon.

Generally, though, comics these days aren’t all that, well, comical. Maybe it’s because so many fanboys treat their comics as SERIOUS BUSINESS, but I’d still expect most fans to have a pretty good sense of humor. On the other hand, we’re willing to play with our heroes in other ways. Marvel’s Strange Tales miniseries is an interesting evolution of the parody comic: A variety of artists get to do their take on Marvel heroes, with results that are weird and funny and beautiful (and anything that gives Kate Beaton a broader audience is a good thing). Books like Astro City and Planetary are non-humor riffs on iconic characters (although Planetary‘s Batman story – reviewed here – is pretty goddamn hilarious).

Maybe we prefer reference to parody today. Both are based in recognition, but reference a la Astro City (or Watchmen, for that matter) feels more like appreciation, less like mockery. I’m not sure how well Strange Tales or the Larfleeze issue sold, but that may be an indicator as well (and Marvel did try out a What The–? series on YouTube in the style of Robot Chicken). We’re in a pretty good time for comics right now (unlike the 80s), so maybe that’s part of it too – in the past decade, the form has really benefited from some fantastic writers and storytellers.

Still, what could those fantastic creators do with a good parody? Books like Strange Tales seem to touch on this question, but they’re pretty rare, and it strikes me that we can always use some deflating. Regardless of quality, there’s a part of me that would love to see a pompous blowhard like Green Lantern get a pie in the face.