Every year I submit a proposal to The Visual Communication Conference. It’s a great, small affair that’s populated with big names in the field of visual communication. In past years I’ve submitted work on the graphic adaptation of the 9/11 report and on memorialization in Shanksville, Pa., the site of the Flight 93 crash.

This year I am NOT doing a 9/11-related project. Instead, I’m investigating iconic photographs through their re-use in humor. I’m pretty excited about the idea – I’ve been wanting to get my research more into the concept of what’s iconic, and I see this as a way to start in an area that hasn’t been investigated (unless there’s some vein of Internet humor site imagery research that I’m not aware of). Have a look.

Finding the iconic through the comic in Photoshop Phriday 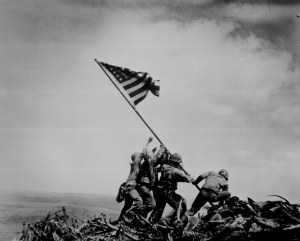 What does it mean for a photograph to be iconic? Previous research has defined iconic photographs as those images that are representative, memorable, and reusable. That reuse, however, need not be related to the original function of the image; in fact, iconic images such as the flag raising at Iwo Jima have thrived into the 21st century because of how they can be pressed into the service of a variety of causes. Great images may depict a specific time, place, and event, but those that become iconic may do so in part by the way they lend themselves to general usage.

This research takes a use-based approach to identifying iconic photography, asking which images are most frequently used in humor and parody. Comedy relies on taking what is known or expected and turning it in unexpected ways; the better known something is, the greater number of people that can potentially recognize its subversion (although we shouldn’t give too much credit). If iconic images are characterized by being recognizable, then highly iconic images should be more frequently used in visual parody than less recognizable images. 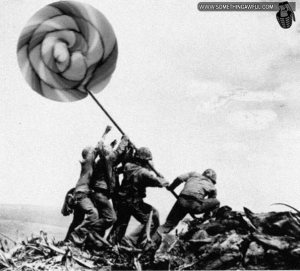 To test this proposition, I examine images from humor website Something Awful. Since 2001, the site has run a weekly feature called Photoshop Phriday. Each installment has a theme, and members of the site’s user forums contribute their images in hopes of being included. Some of these draw on Internet gags and memes, trying to be funny by making references to running jokes, and others incorporate recognizable photographic images into the game. Certain images (e.g., Tiananmen Square) seem to appear again and again, while other images deemed iconic (e.g., Migrant Mother) have never made an appearance. Although the site’s mainly teen-to-30s male demographic puts a limitation on what we can generalize from study, observing what is used and how provides us with a new angle on how the photographic record endures and repurposes itself in society.

One thought on “Submitting to Viscomm 24”