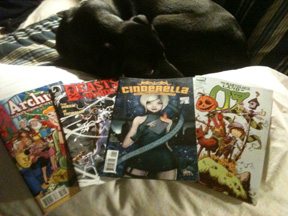 I didn’t plan this, it just worked out this way. This week’s pull is surprisingly fluffy – at least on the surface.** Oh sure, some of this week’s titles are squishy all the way through, but don’t be too quick to write them off. Cute isn’t always cuddly.

The Marvelous Land of Oz #1 of 8 ($3.99 shelf grab) – This is a sequel of sorts; earlier this year Marvel put out a Wonderful Wizard of Oz series, but I only glanced at it. This one’s based on the ACTUAL sequel to the Wizard of Oz, by L. Frank Baum (there’s something like 15 books in the series, every one of which I read as a kid). If you’re a fan, it’s a no-brainer. For the rest, it’s a pretty nifty fantasy story in a a richly developed world. And take a look at the art! Scottie Young has a terrific, loose-but-detailed style, and the colors have an almost watercolor-like feel. It’s like reading the most lavishly illustrated children’s book ever. Nothing wrong with that.

Cinderella: From Fabletown with Love #1 of 6 ($2.99 shelf grab): It’s about damn time. Cindy is one of my favorite Fables characters (along with the Tourists and Boy Blue), but you never see enough of her. To the unknowing, she’s a ditzy shoe shop owner who spends money like water; on the job, she’s Fabletown’s #1 undercover agent. Just what the job entails is the subject of this issue, which starts with our heroine wrapping up a mission in blockbuster fashion. It’s a little by-the-numbers spy genre, but every story has to start somewhere. What’s great about Fables at its best is the way it takes a well-known story (e.g., Snow White) and gives it new depth while staying true to the original. If Cinderella can do that, it should be a fun ride.

Archie #602 ($2.50 shelf grab) – Yes, Archie. I am reading Archie comics. But there’s a good reason for it! The big issue #600 kicked off a six-issue arc where Archie gets married; as a patriotic American, you have a duty to find out what happens. It’s also the only time I’ve ever actually seen an Archie comic, well, in a comic shop – usually they live on those grocery store spinners alongside forlorn two-month-old X-titles. 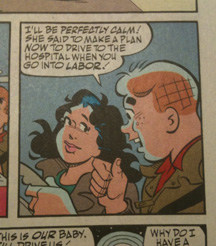 If you haven’t been following, this series was plugged as “Archie marries Veronica!” It turns out that’s a bit of a ruse. In the first issue, Herr Andrews finds himself at the crossroads of Memory Lane; instead of going back, though, he chooses to go forward to find out what might be. The first road leads him to life with Veronica. Shockingly, it turns out great (aside from some brief sobbing from scorned blonde Betty, who winds up the maid of honor). Mr. Lodge gives him a job, they have kids, everything’s fantastic.

At the end of this issue, Archie heads out for a Christmas evening walk, which takes him back to Memory Lane, which means next issue … Archie marries Betty! (it also means Archie walked out on his wife and twin children for another woman! On Christmas Eve!) So yeah, it’s canonical fan fiction, but it’s still kind of a ballsy move. As always, Archie art is both unsurprisingly consistent and kind of freaky – I don’t know why the post-DeCarlo artists can’t solidly stick the characters’ eyes in the same place, instead leaving their expressions drift all around their faces. But I am halfway through my contractual obligation to read this, and it’s not terrible. Seriously, though, choosing Veronica over Betty?

Beasts of Burden #2 ($2.99 shelf grab): It’s a comic about puppies! Well, yeah, but don’t bring this home for the kids. I found Beasts of Burden #1 last month and liked it pretty well as a stand-alone about pets with some magicky stuff thrown in (also a giant exploding frog). But this one changes the game. What starts as a story about pets defending their neighborhood first turns into a ghost story and then becomes … something darker, and a lot less fantastical.

If this issue is an indicator of the writers’ sensibilities, Beasts of Burden is going to be a deceptively adult title. This is a turn I’ve noticed in a few titles recently: Mouse Guard is a great example, and the new Stuff of Legend has shown promise as well. What sets Beasts apart for me, though, is how it goes beyond the story’s fantasy elements for its drama. Without spoiling anything, the story reminds us that some of the worst monsters are very real.

**Okay, so I left out a few titles for the sake of a more coherent theme. I’ll get to Invincible next week, I promise.