Mountaineer Week kicks off today with the WVU-Louisville game, but the excitement has begun! In layman’s terms, that means crafts, contests, low class attendance, and junk food on central campus (we don’t usually have crafts).

Much as the return of spring is signaled by the arrival of the American Robin, so too does Mountaineer Week have its herald. Just steps from the door of Martin Hall on Friday stood a symbol of Mountaineer Pride: The fried dough truck.

You from outside the Mountain State may scoff, but the return of the funnel cake truck signifies a week of events that includes stuffing as many students as possible into a monorail car and people selling old branches stuffed with mushroom goo.

There may also be kettle corn.

The common circle in front of Mountainlair (WVU’s campus center) tends to serve a different purpose than what I was used to at Mizzou. Speaker’s Circle there was set aside for loud people with an opinion to yell it to the passing crowds. Most Wednesdays you could expect Brother Jed to show up and condemn everyone to hell. At its best it was a public forum, but usually it served as a spot for the newly independent to heckle screaming jackasses. Democracy! 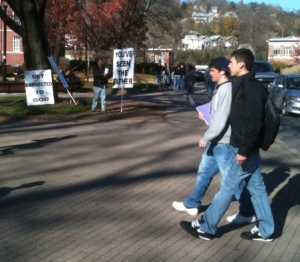 At WVU, the equivalent circle (I don’t yet know if it has a name) gets the odd holy roller or abortion van, but more frequently it’s home to booths of people selling stuff, whether fundraiser baked goods, handmade bajas, or horrible, horrible Ed Hardy clothing. The various student contest personnel also tend to congregate here, so around Homecoming you get a lot of people begging you to vote for their friends. It’s more of a marketplace than a forum, but it’s got its own character.

Also present on Friday: The Rockstar energy drink extreme energy crew. You can tell they’re extreme because they’re driving a kickin’ black pickup and wearing white flatbrim caps (the hyperlink above, by the way, shows me their website is rockstar69.com. I can only assume rockstarsexboobs.com was taken).

On my way to the car, I was handed a Rockstar Citrus Mindraper by a dude. They actually handed me two, but I was blessed with only one free hand at the time. It was my obligation to try the thing.

Never drink anything this color.

I’ve had Red Bull once. I had it once because I did not want to have it twice. Rockstar Citrus Inquisition tastes like Red Bull and Mountain Dew, but the metallic and sugary parts of those respective drinks are somehow amplified by the combination. The sucro-metallic sensation wasn’t bad, but it wasn’t anything desirable either. I don’t think I picked up an energy surge, but four hours and a meal later, I could still taste it.

I’ve seen reviews that compare the tastes of energy drinks to different bodily fluids. I will not, but I admit that’s partly because I lack the standard of comparison those other reviewers seem to have. Rockstar Citrus Holocaust was unremarkable, but it didn’t lessen the Mountaineer Week experience for me. Maybe the funnel cake counteracted it; it could be that Rockstar Citrus Hysterectomy had nobly sacrificed itself to keep me from slipping into a grease-induced coma. For that, I am grateful.

Now get out there and enjoy Mountaineer Week.