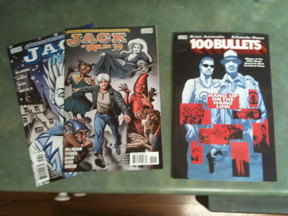 Last week was the third big week in a row I’d had for comic pickups, so I guess it’s not surprising that a lull was coming. This week my sole comic (pull or otherwise) was Jack of Fables #39, so to round things out I also grabbed volume 3 of 100 Bullets, a classic title that I’ve only just been getting into. There was one other thing: Jack of Fables #37 also showed up, after being accidentally dropped by the supplier two months back, but I’d already found this elsewhere (but being a good subscriber, I still paid for what I’d ordered since it wasn’t the store’s fault).

Jack of Fables #39 ($2.99 pull): Thank god for the last three issues. I’ve been teetering on dropping this book for a while. The big war story was a dud filled with improbable events, the Great Fables Crossover had its moments but mostly served to clear the gameboard, and the Jack of the Apes story was maybe one of the dumbest things I’ve ever read.

Now that Jack’s son, Jack Frost, is taking a central role, however, we’ve got the makings of a good Jack story (the original Jack is out of commission as he slowly gets fatter and more disgusting, with a payoff in this issue), which got rolling back in the prodigal issue #37. Jack Jr. is everything dad isn’t – brave, noble, reliable – and he undertakes a quest for a race of monsters that look remarkably like four-armed versions of Bone’s stupid rat creatures.

In attempting to tell their two stories, the book is paced a little breathlessly, forgoing any show of how things happen and mostly getting on with the actual happening. This explanation-free sequence of events approach is what’s always been a little annoying about Jack for me in the past, but it’s still nice to see an actual story getting geared up.

100 Bullets, vol. 3: Hang Up on the Hang Low ($9.99 TPB): This book continues to be a great read. I didn’t start reading 100 Bullets until it concluded with issue 100 (own it but haven’t opened it), which was when I really started hearing about it. The premise so far: An aging man in a suit and tie (Agent Graves) shows up, seemingly at random, to offer individuals an attache case containing an untraceable gun with 100 bullets. He points out an individual – often an old grudge or a new enemy – but leaves it to them to make the choice. Given the assurance you’d get away with it, what would you do?

As of book 3, we’ve learned that Agent Graves’ approach may not be so random. The stories, however, focus far more on the individuals left to choose. Here, Graves gives a young man, Loop, the case and a picture of Curtis, the father he’s never met. Curtis is a collector for the local kingpin, and Loop’s choice of whether to blow the man away or get to know him sets in motion the events of the story.

At the end, we’re once again left to wonder just how much Graves predicted at the beginning, and also get a little more of the superstory of the man who’s seemingly at odds with Graves’ mysterious mission (which, for the first time, we learn may not be as noble as we may have suspected). It’s hard to describe without giving things away, but the human drama here is fantastic, and the larger questions (Who is Graves and what is he after?) just get more compelling as we additional snippets. Wish I’d read this as a comic, but it’s nice to be able to digest a story arc all at once.